You are here: HomeLatest NewsTop construction company to work for in the UK.

Top construction company to work for in the UK. 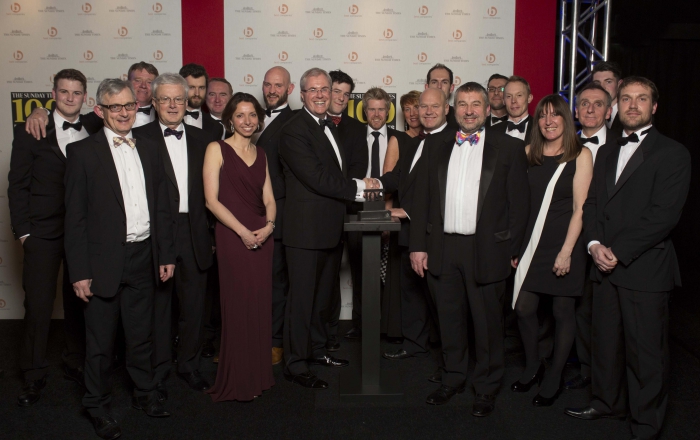 Announced at last night’s prestigious awards ceremony for ‘The Sunday Times Best 100 Companies to Work For’, Lindum was named as the top building company and ranked 18th overall.

‘The Sunday Times Best Companies to Work For’ lists are compiled based on research from the largest survey of its kind and this year 1055 organisations applied and 428,719 employees were surveyed.

Each year Lindum invites a number of employees from across the Group to represent the company at the high profile awards evening to hear the results first hand. Jane Beaumont, Payroll Manager for the Group, was one of those who attended the event at Battersea Events Arena, London, on Thursday 26th February.

Jane said “What a brilliant experience to attend the awards ceremony. I have been employed at Lindum for the majority of my working life, some 25 years, and enjoy every minute. You really do feel part of ‘the Lindum family’, with genuine people who care about colleagues and take real pride in doing a good job.

“For Lindum to be recognised on this national stage amongst well known businesses such as Volvo, BMW and Beverbrooks is a great achievement and truly reflects the fact that we are special!”

Newly appointed Finance Director, Robbie Kok, who joined the Main Board last month was delighted with the achievement, he said “I know Lindum has an impressive track record of appearing in the Top 100 list for over 10 years and within the top 20 since 2008 however this is never something which is taken for granted. As the results are totally governed by what our employees say about the company, we take this very seriously as a measure of our performance and it helps identify areas where we can improve.”

Daniel Farrell, who joined Lindum in 2011 as an apprentice, is now qualified and employed as a ground worker with the Lindum Homes division was also among the guests at the awards and endorsed the company’s achievement “From day one I have received support and encouragement from everyone at Lindum, from my Site Manager through to the Managing Director. After successfully completing my apprenticeship I was delighted to be offered a position with the Lindum Homes division, where I had already spent some time working as part of my apprenticeship, and I am looking forward to continuing my career progression with this great local company.”

Lindum was one of only 139 organisations to be awarded a 3 star rating, described as ‘extraordinary’, by Best Companies*