Following Government advice, Lindum initially took the decision to stop all but ‘essential’ work. However, after implementing strict new guidance on hygiene and social distancing in our workshop, on sites and in offices, we are now focused on safely restarting. We are open for business and available on the usual number (01522 852520). Please do to get in touch to see how our expert craftspeople can help with your bespoke and heritage joinery needs. Please take care and we look forward to seeing you again soon.

You are here: HomeLatest NewsPupils Sitting Pretty at Tetford School 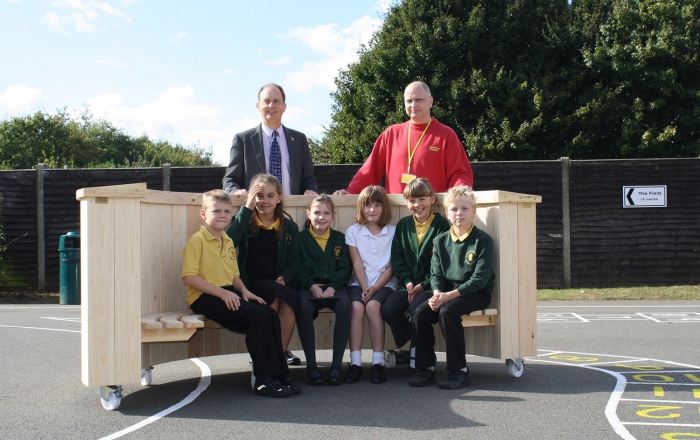 The Edward Richardson Primary School at Tetford are now the proud owners of their very own ‘dohut’ inspired seat, the only one of its kind which has been craftsman made by Lindum Joinery.

After winning a competition organised by RIBA to design a bathing hut for the seafront in Mablethorpe, the pupils were disappointed when the project hit delays due to the original location for their ‘dohut’ designed beach hut being declined and no alternative being found.

As sponsors of the competition, Lindum agreed to make a model of the winning design based on the shape of a donut and, after receiving a letter from pupils at The Edward Richardson Primary raising concerns about the delays, Lindum offered to work directly with the school to resolve the situation.

Following a meeting with pupils and teachers to find out what they would find useful and be a suitable product in recognition of their hard work and winning design, it was agreed that Lindum would create a curved ‘dohut’ design inspired outside seat as a replica beach hut was not required.

With very clear guidance from the pupils, Lindum Joinery set about designing and making a sturdy, moveable, curved seat in time for delivery after the summer break.

Pupils and staff were delighted on Wednesday (24th September) when members of the Lindum Joinery Team arrived with their new seat as Head Teacher, Andrew Hyde explained “Whilst it may have taken a long time for the design imagined by our pupils to become a reality we are delighted at the outcome which has been well worth the wait. The team at Lindum have produced a fantastic piece of outdoor furniture for use by pupils for many years. We have already been visited by pupils who designed the original concept and have moved on to secondary school to admire the outcome!”

Photograph above shows Head Teacher, Andrew Hyde with the Lindum Joinery craftsman who made the seat Iain McDermind along with a number of pupils from the school council trying it out for size!