The huge Cornhill Quarter project involves the major regeneration of part of Lincoln city centre. After successfully completing Phase One of the scheme, which was the refurbishment of the city’s Grade II listed Corn Exchange building, Lindum was appointed to carry out Phase Two.

Work began by propping up the front walls of the shops so the buildings behind could be demolished. This allowed for an extension into the rear courtyard to form four new retail units.

Next, an old restaurant and some existing retail units further along the street were partially demolished before being extended to create modern, ground floor retail space and nine residential apartments.

Our team then re-paved Sincil Street between units 18 and 35. 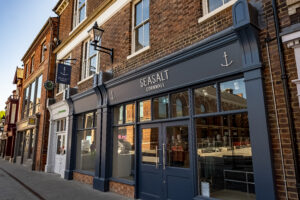 As part of the work, Lindum’s expert heritage joiners were commissioned to create new shop fronts and new windows for some of the buildings along Sincil Street. Their task was to restore the area to how it would have looked in the early 1900

The team worked from architect’s drawings, which had been produced following extensive historical research. While the original shop fronts would have been made from material such as oak, Lindum used Sapele Hard Wood, which is a stable and more durable product.

Construction of the new shop fronts required a sympathetic and careful choice of mouldings and joinery section details to exactly replicate the former structure, while at the same time giving an uplift to the whole street scene.

Our team worked closely with the architect and City of Lincoln Council’s conservation officer throughout. 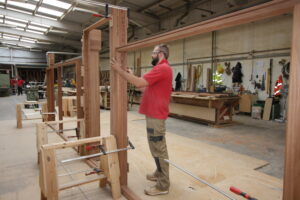 The final part of our work on Sincil Street involved the refurbishment and renovation of a shop unit to create a Lincolnshire Co-op food convenience store.

The completed building featured an impressive curved glass frontage, set in a new wooden shop front inside the original building. This work involved matching up the new frontage to the existing building, which included removing old brickwork at ground level and rebuilding it to match the existing curve. It also involved retaining a 1940s glass panel overhead.

Design touches also reflect the building’s heritage, such as vintage-style lighting, tiled flooring and a hanging clock on the corner on Norman Street and Sincil Street. 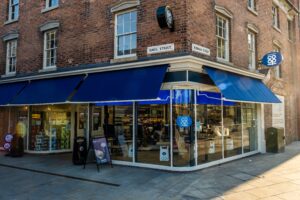 Following the success of Phase Two, Lindum was appointed to carry out Phase Three of the Cornhill Quarter scheme.